The Boys From Little Mexico 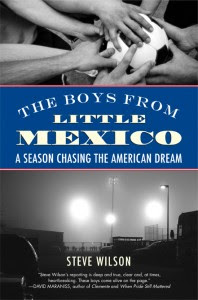 So how's everyone doing in the last breathless run-up to World Cup? Checking out some of those friendlies? Obsessively filling out wall charts, making predictions? Chewing your own arm off in crazed anticipation?

One of the ways we here at a pretty move have been coping is by acquiring a stash of footie books to keep us going before, during, and in the aftermath of World Cup 2010. We've got some old classics and some great new reads, and we'll be writing about some of them in the coming months. But in the meantime I wanted to give readers a heads-up on a new book we'll be talking more about next month after World Cup, The Boys From Little Mexico:A Season Chasing the American Dream.

This may be of particular interest to Portlanders--the story of the mostly-Latino soccer squad at Woodburn High School. Like some of the best footie books, it looks to be one which is about so much more than the game itself--not that the game isn't enough, but it also acts as such a great lens for everything from politics to sociology and beyond. And in the wake of the Arizona hullabaloo, this is a book about the real America--you know, the one that's full of immigrants, the America that we all came from (unless you are of indigenous descent).

We'll be featuring an interview with writer Steve Wilson in July, but in the meantime, pick it up! After all, what else are you gonna do with yourself in between matches for the those 31 days?
Posted by lynda at 10:57 AM

Newer Post Older Post Home
Subscribe to: Post Comments (Atom)
We are Americans who love soccer, or football to the rest of the world. From our rough-and-tumble Portland Timbers at the local stadium to our beloved superstars FC Barcelona at that cathedral of football, Camp Nou, we are always on the lookout for a pretty move, a graceful flick, or a sublime save. Long live the beautiful game!

This work by derek, lynda, lisa is licensed under a Creative Commons Attribution-NonCommercial-NoDerivs 3.0 Unported License

Promote Your Page Too